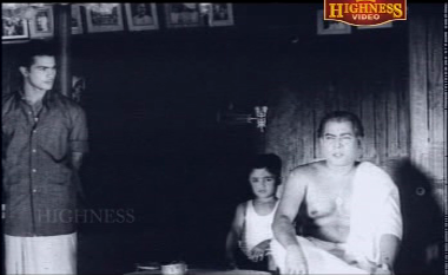 Was watching Kesavdev’s film adaptation of his popular work, Odayil Ninnu(1965), and thought I need to share this with you, the very young Suresh Gopi’s debut in Malayalam Cinema, as the feudal landlord’s son, a character who also becomes the root cause for which the young Pappu ( Sathyan), played by Master Dasarathan, runs away from home to the big, bad town of Kollam! It was Master Dasharathan and NOT Suresh Gopi who played the young Sathyan, as it has been erroneously  put up in Wikipedia and the IMDB profile of Odayil Ninnu(1965). The young Suresh Gopi hardly spoke a word, other than standing in the shadows of his feudal landlord, his father, seemingly, shy, timid and a tad disoriented.

Here is Master Dasarath, who needs to get his due credit as the young Pappu!

And all through the movie, from the time the grown-up Pappu came on screen, I just couldn’t help but fondly recall that delightful quip from Sathyan Anthikkad’s Yathrakkarude Shradhakku, where Oduvil, the friendly neighborhood, sleepy apartment security guard, goes on and on about “that beedi he gave to Sathyan during the shooting of the film, and Sathyan making it a point to smoke it onscreen.”

The Video, for some more clarity