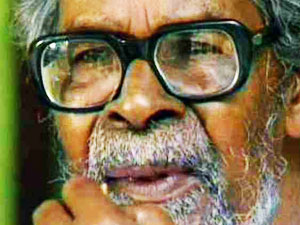 There is some confusion regarding these two drama productions included in the KPAC compilation of Drama Songs. For one, they DO NOT feature in the “official KPAC List of Dramas” as published on their website.

Update : 15 July 2010 The celebrated musicologist, columnist and Malayalam Cinema archivist B.Vijaykumar , confirmed that these two productions were from Kerala Theaters and had nothing to do with KPAC !!!!

The probable reason was that both the productions, Visharikku Kaattu Venda and Kathirukanakkili were creations of Ponkunnam Varkey, the enfant terrible of Malayalam Literature, and as such were very, very popular on the drama circuit. Maybe HMV was milking the franchise dry with stuffing the last soundbyte on vinyl and getting the ‘maximum dough’ out of it.

But then again, there were songs that were equally popular in the KPAC dramas selected, like Neram Mangiya from Mudiyanaya Puthran that didn’t make the cut.