There is a quote  attributed to James Dean on acting that goes, “An actor must interpret life, and in order to do so must be willing to accept all the experiences life has to offer. In fact, he must seek out more of life than life puts at his feet. In the short span of his lifetime, an actor must learn all there is to know, experience all there is to experience, or approach that state as closely as possible. He must be superhuman in his efforts to store away in the core of his subconscious everything that he might be called upon to use in the expression of his art. ” Forget the gender – if there is one face on the celluloid screen that has even traversed way beyond the ‘experiences of life’ that James Dean so profoundly mentions in the journey of an actor,  it has to be Srividya.

Born on 24 July, 1953 in Chennai, Srividya ( whom her mother wanted to name Meenakshi ) was an accomplished dancer and a singer even before she found comfort under the arc lights. Her biggest source of encouragement was her grandfather Vidwan Ayyasamy Iyer, who had already discovered the amazing, latent talent in his 3-year old grand daughter who could distinguish raagas at such a tender age. She used to accompany him to the local produce market in the early hours – it was a daily routine, and music lessons were passed on from grand-parent to grandchild during those walks. By the age of 5, she had started to learn classical dance. There is a delightful event from her childhood that sums a lot about the prodigy in Charumathi Ramachandran‘s tribute to Srividya :

A December-season radio relay was being heard by Akka and her accompanists. Viddhee was a tiny tot playfully jumping around. Palghat Mani Iyer, the mridangam maestro, was playing a fiery thani (solo) . The whole group was perplexed as to the time cycle he was playing — was it seven beats or six they wondered. Suddenly Vidhya the child piped out, “He’s playing thaka dimi taka thakita — nine beats,” and all of them acknowledged without doubt her laya gnana. Then and there Akka decided that the child should learn dance. Her perfect face and large lustrous eyes were ideal for dance. Once, however, the critic Subbudu felt that she should become trimmer to dance better though he praised her competence no end.

So, you see, these came natural to her – music and dance. But what she was obsessed with was the arc lights. For someone who had vowed to marry MGR once she reached adulthood, the close friendship with the Travancore Sisters ( they lived next door )  kept reinforcing the obsession she had inside – to be on the silver screen.

Her first ‘invite’ to be an actor came from an unexpected source – from a prospective buyer of their palatial mansion which was put out in the market to tide over financial difficulties. She debuted as a child artiste in Thiruvarutchelvar (1967) and before she knew,there was a smattering of dance features and brief appearances onscreen ( mostly as a dancer ), that includes Merryland’s Kumarasambhavam (1969), Chattambikkavala (16-year old Srividya paired opposite  57-year old Sathyan) in 1969, and Swapnangal (1970) in Malayalam, Dasari Narayana Rao‘s debut film Tata Manavadu (1972) amongst others.

Srividya and Vincent in Swapnangal (1970)

Though K Balachander‘s  Nootrukku Nooru (1971) smashed box-office records of that year with its refreshing theme that kept you riveted, she kept praying for a ‘definitive break’ that should come around the moment she graduated high school, because she just didn’t have a roadmap after that which excluded filmdom. She just needed a definitive role that underlined her passion for acting, and

laid all her insecurities about the career path she had chosen to rest. And that came as the role of Sumathi, the danseuse in A Vincent‘s Chenda (1972). Acting in Chenda, especially under the tutelage of A Vincent was like “being in the best classroom for acting with the best tutor“, she recalled in an interview. The Maestro made her aware of her best angles for the camera, the best features to subtly “show off” for the screen, in short everything technical an artist needed to know about ‘projecting onself’ for the movie camera. Chenda also had her pairing with Madhu for the first time in a leading role ( they had come together in Swapnangal, but it was Vincent who was paired opposite her ) – it was a winning combination that were to be repeated for many of her popular movies. It worked so well, that she even found herself handling the leading roles of productions directed by Madhu as he shifted over to Direction and production along with donning greasepaint.

As an Actor in Malayalam Films.

( Please note what follows is about her Malayalam films)

I have always felt Srividya, in her career as an actor, had three significant aspects that made her one of the most loved actors in Malayalm cinema.

Srividya went on to portray every role possible that she felt confident about – regardless of whether those roles were  ‘older’ in the commercial equations in moviedom, regardless of leading men paired opposite her and was never shackled/pigeonholed/bracketed to a ‘set of emotional ranges’ on screen. Speaking of leading men, I still haven’t forgotten the moment of surprise when I watched Srividya paired opposite a young, dashing Mammootty ( according to the Principle of the Evergreen Screen Hero in Malayalam Cinema) in Poomukhappadiyil Ninneyum Kaathu (1986) – though they were more or less of the same age, onscreen, it was a different story altogether, if you get the drift. She hardly cared for the ‘established, unspoken industry norms’ – else, you wouldn’t have seen her playing mother to Mammootty in Ayanam (1985) and elder sister-in-law to Mammootty in Thinkalaazhcha Nalla Divasam (1985) !  This is just an example .

Maybe she didn’t have much of a choice in accepting every single opportunity that came her way post her separation and the most crucial phase in her life, but they came as a blessing in disguise. The sheer variety of roles that came her way as a result also gave us some of the most memorable performances in her career. At the risk of repeating myself, whether it was a Udaya staple or a KG George noire drama, she was at ease in both and transformed into exactly what they wanted on screen. At the risk of repeating myself,

Sreevidya spoke through her eyes. Her voice was just an embellishment, I feel. Every emotional nuance could clearly be read from her face, even the most subtle, and she didn’t even have to try hard. It was effortless and regally graceful ( I know I am going overboard with flowery adjectives, but can’t help it when it comes to Sreevidya).

When it comes to my favorites, they are an armful and then some.

If you aren’t convinced yet, look what State governments thought of her performances :

From the early Nineties, her output had been phenomenal. It seems to be that she was grabbing every single opportunity to act that came her way, more as a therapeutic outlet for the bitterness that life seemed to have served in generous doses, be it love, marriage, or the comfort of loved ones – the death of her mother affected her the most . She was her confidante, best friend and the shoulder to lean on, that carried her through her most darkest times and her anchor in her times of need, someone who was markedly different from the woman she had known as  her mother in her growing years. It was also during this time that she started off her glorious stint in television, that saw her coming around every evening into the comfort of your living room and leaving your heart in a vice by the end of the evening, across  TV channels. With greasepaint and arc lights, excellence followed.

As an Actor for Television.

Srividya blazed across the small screen with her quiet grace and nuanced histrionics, making her one of the most sought after and critically accalimed artistes for TV productions too. I can recall Vasundara Medicals directed by Dr. S Janardhanan, Avicharitham, Swapnam and Venal Mazha by KK Rajiv and Amma Thamburatti by Sreekumaran Thampi, from those times. (Please do let me know if there are more ).

According to K.K. Rajiv, “She was an uncompromising professional who strived for perfection. Her commitment to work was something the youngsters should emulate,” in a tribute that appeared in the The Hindu post her demise. His `Avicharitham’ also won a number of awards, including the State television award for the best female actor. In Venal Mazha, she was cast opposite Ratheesh, based on a suggestion made by Mammootty who asked him to try them together onscreen, as they were just perfect for the storyline he narrated to him.

Sreekumaran Thampi has time and again reiterated the fact that he wrote the lead character of the hugely popular Amma Thamburatty with Srividya in mind, and there was no one else who could portray that character with the required intensity than her. In a rare, moving gesture that has never, ever happened in Malayalam TV broadcasting, as the director of the TV series, he came on screen after she was hospitalised in a critical condition, stating that he was taking the series off-air as the whole project didn’t hold any relevance now that Srividya’s continued participation was doubtful at that point of time. I do not think  any artist  would ever be extended that honor ever again.

An episode of Avicharitham, made for TV by KK Rajeev.

Kaithapram was the inspiration for her to revive her dormant passion in Carnatic classical music with a kutcheri at the Navaratri Sangeeta Mahotsavam held, again, at Kozhikode (please correct me if am wrong ). Her ardent faith in the teachings of Sai Baba in her later years also saw her composing a lot of Sai Bhajans which have been released as albums. ( Again, if anyone has more details, would love to know more ).

She passed away, after a prolonged battle with cancer, at a time when the wheels had turned full circle and brought along with it, a flourishing career in films and TV. There was a surprisingly delightful revival of her latent talents as a singer and a dancer, and above all acceptance and stoicism that I believe, made her cruise on through till  she passed on to the Other Side, on 19 October 2006, aged 53 years. According to The Hindu, “Two months before her death on October 10, 2006, Ms. Srividya had executed a will and entrusted Mr. Ganesh Kumar, cine actor and MLA, to register a charitable society to ‘start a music and dance school for efficient students who could not get ample opportunities due to lack of money or to give away scholarship to such students to continue their studies and to extend financial assistance to deserving ailing artistes.’

I am bequeathing all my properties except some payments mentioned elsewhere in this bill. An appropriate body with eminent persons, registered under Charitable Societies Act should be formed and the realised value of all my assets should be transferred as a nucleus fund

she said in the will entrusting Mr. Ganesh Kumar to register the society. 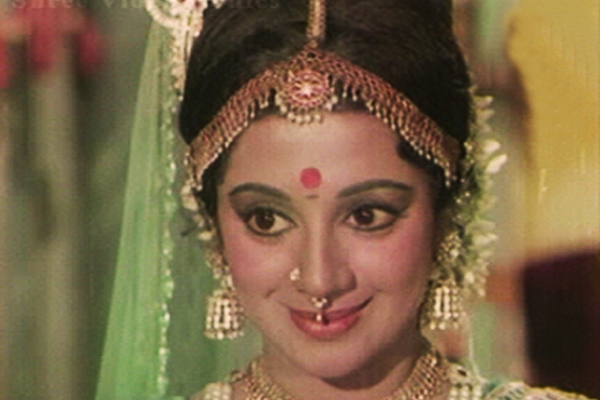 Srividya was a Singer and Danseuse by sheer talent, and an Actor by choice. A combination, that rarely comes along, in the Cosmic scheme of things on Celluloid.

10 thoughts on “Srividya | Actor, Singer, Danseuse and Beauty that defined a Generation”