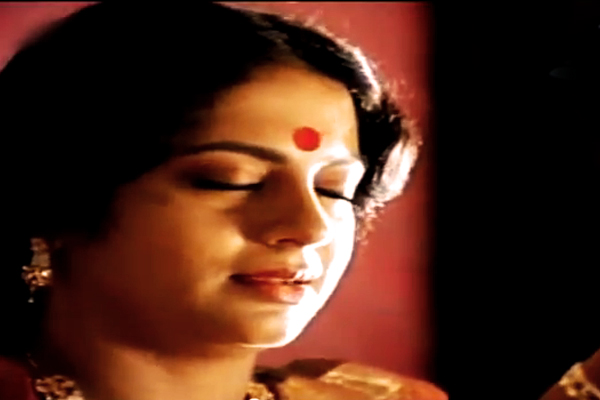 Music flowed in her veins. Then again, so did dance and emoting, when you think about it. She was steeped in the music, surrounded by it, right from the time she was born, as MLV’s daughter. There were always her mother’s disciples in attendance, doting on her as their favorite,  and a proud grandfather had already recognized the sheer talent waiting to be discovered in his grandchild. Srividya was a child prodigy in the broader sense of the term. Her grandfather, Ayyasami Iyer who discovered the latent talent in the 3-year old Srividya and started imparting informal lessons in basic Carnatic music to her. After all, she was just 3 years old. In an interview with Jeevan TV aired years back, she mentions about how her grandfather used to be amazed at how she used to point out the one amongst his small band of students, a tad elder to her, who strayed beyond the pitch and the scale of the keerthanas.

She could identify raagas at an age where her peers were trying to form their first coherent sentence together. Her first official guru was Vidwan B. Krishnamurthy who was also in for a surprise as his latest student, all of three and a half years belted out a keerthana pitch-perfect, when asked what all she knew in classical music. It shouldn’t have been surprising, coming from the daughter of the legendary ML Vasantha Kumari, considered one part of the Female Trinity in Carnatic music, DK Pattammal and M. S. Subbulakshmi being the other two. By the age of 10, a visibly proud guru had decided and announced that she was ready for her own vocal concerts !

Then again, her dance arangetram was at the age of 11, at the Sri Krishna Gana Sabha  was hardly surprising for someone who could identify ragas at the age of 4 and who had also started imparting lessons to the fresh students at TK’s ‘gurukulam’ at the age of 8 ! It was also an year of great loss for her, personally, as  Ayyasami Iyer passed away soon, which came a big shock to the young Srividya. Srividya, the singer in Carnatic classical ouvre took a back seat with her debut into the film world, though she had sat in as a vocal accompanist on her mother’s  US tour. Even there, it was always her dance that took centre-stage and not music.  Srividya’s sojourn in Malayalam playback, or for that matter, film playback as we know it,  was with Ayalathe Sundari (1974 ), in which she also was a part of the cast, paired opposite Raghavan, if you consider the released productions. Ayalathe Sundari had her in two songs, both of which she pirouetted and jived in floral prints and an even more dazzling smile.

Here is Srividya ripping through Swarnachembakam along with the same playback team.

The reason why I’m mentioning this is the fact that she mentions in one of her interviews about a song that she did for a production, set to music by V. Dakshinamoorthy Swamy, but that movie was canned.  ( If anyone has any details on this track, do write in. The year too is unknown ) . As a musician, Srividya held Swamy in the highest regard as a music director and was in awe of the dexterity with which he infused the ‘classical’ nature of the most difficult raga into a  ‘popular’ composition. There is a certain vivaciousness and mirth in her vocal tone of her movie songs that always makes you smile ( maybe it’s a perennial Srividya hangover – one can never be puritanical when it comes to her talents), or maybe it was just that the songs we heard leaned towards playful love and humor.

Balachandra Menon, who always ‘thought up’ some refreshing aspect to be served along with his every production as subtle marketing ploy, got her singing in two of his movies. She had been a perennial favorite of hers, specially in mother roles, right from his early years as an actor-director.

In Njangalude Kochu Doctor (1989), it was an upbeat duet Kaattinum Thaalam , written by S Rameshan Nair and set to music by Darshan Raman. As Srividya joins in to complement Balachandra Menon’s vocals, you can’t but break into a smile at the way of listening to her vocals filling in the cracks, ‘smooth’ over   the shaky male vocals and liven up the entire track as the ‘silken’ complement.

She sings a lullaby interlude, more on the lines of Kalyani Menon’s rendering in Vinnaithandi Varuvaaya.

In the late eighties and early nineties, she was also a part of a number of movie ensembles that did stage shows in the Middle-east and the US which has included her solo recitals. This is a home-recording of her cover version of Gopike, one of the perennial favorites from the 80’s for any one who loves Malayalam film songs, picturised on her. This recording and the next one, Manassilunaroo, reached here courtesy of EK Jayachandran, aka PixelBlue who was generous enough to let these be shared in a public domain such as this blog. Thanks again, EKJ. Both the recordings are from a Stage-show in the Middle-east she was a part of, along with Balachandra Menon and Venu Nagavalli in 86-87.

The original by S Janaki.

The original sung by Dr KJ Yesudas and S Janaki

Her foray as a playback singer in Tamil was in 1992 in Amaran, the wicked ‘sanda bajaaru maama konjam ushaaru’  aka the  Tring Tring song. Sarvanan mentions about her singing in a few Tamil pop albums and a  digital remix versions of MLV’s film songs- need to get more details on that.

There is also a Malayalam connection to her re-intepretation of MLV’s film playback songs. She had agreed to render one of the very popular track from yesteryears of MLV, Kaatte Vaa, Kadaley Vaa from Chaturangam (1959) (written by Vayalar), for the Vayalar Memorial’s inauguration in Thiruvananthapuram, but sadly it never was to happen due to her busy schedule and professional commitments for the TV.

After her relocation to Thiruvanathapuram, post the messy, protracted legal battle that had the court ruling in her favor,  she also became a staunch follower of Sai Baba’s spiritual guidance. And it was Sai Baba who first asked her to resume singing.

She said she was amazed when he spoke to her about her music , and she took that to be a divine sign as she knew that Sai Baba could in no way known about her childhood tutelage in music. She started off with composing Sai bhajans in earnest, and along with it, some of her own songs that she never got the time to set to music. I am told that there were nearly 6-10 compilations of Sai bhajans of hers that have been released in the analogue format ( cassette tapes ) in the late 90’s, but have been unable to find any. ( Here again, if anyone has more details, please do write in ). The encouragement to do a full-blown kutcheri came from Kaithapram Damodaran Namboothiri who first cajoled/encouraged her to performing live at the Navrathri celebrations at Calicut. They  had initially decided that she would be rendering Sai bhajans but Kaithapram later encouraged her to include three or four Carnatic compositions too into the set, and she ended up performing a kutcheri live. Recordings of this too exist.

I recall vividly her being invited for the Symphony program on Kairali TV hosted by V Krishnakumar . Her rendering of  Kaatil ilam Kaatil and Lag jaa Gale se to me sounded better than the original. And what amazed me then, as always, was the astonishing control she had on her voice, the natural confidence and above all, her flawless diction as she crossed languages and regions. Come to think of it, how many movie personalities do you know who were born and brought up in Tamil Nadu, yet have acted,  sung and been accepted in Malayalam films than in Tamil? Hardly anyone. So there.

I often wonder how it would have been, had Srividya chose to follow in her mother’s footsteps into the mesmerizing world of Carnatic classical music. I am sure she would have been equally successful in that too, had she channeled her entire energy and efforts into that. Going by the scattered outputs of Srividya the Singer through the years, there is something irrefutable, something  that remains absolutely certain. The doe-eyed four-year old that waggled a finger against discordant notes and picked out intricate percussive rhythm patterns from her mother’s vocal rehearsals as she frolicked around the palatial mansion in Dr. Radhakrishnan Salai, never ever went away anywhere. She was right there with the Dancer and the Actor, evolving and maturing through the years, though we were  fortunate in getting to meet the Actor more often, across the years.

Leaving you with Uttara Swayamvaram, one of her favorite tracks from V. Dakshinamoorthy Swamy.

53 is a cruel age to pass on to the Other Side.If only she had been with us for a while longer. If only.