Taking off from a list of favorites that was compiled a year back, during the eve of the Onam festival, this is another handful of songs from old Malayalam movies that bring out the spirit of our harvest festival.

[ All track excerpts are courtesy of MSI ].

A bi-lingual, produced in Tamil and Malayalam by the legendary TE Vasudevan, this was a social drama that rode to success on the ‘maternal shoulders’ of Aranmula Ponnamma.  Of the 14 songs written by P Bhaskaran, set to tune by V Dakshinamoorthy, it also had a qawwali, which according to Vijay ji is the first Qawwali ever sung in Malayalam films. What makes it all the more interesting that it is led by none other than V Dakshinamoorthy himself, which was also his debut as a playback singer ! Pon thiruvonam is sung by P Leela and is the best as they come as one that heralds the arrival of the festivities. 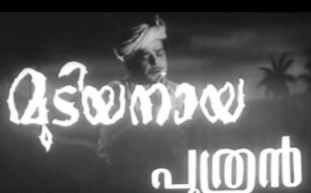 The first in the series of the KPAC plays to be adapted on to the silver screen, the popularity of KPAC’s play which debuted in 1957 helped in its own way fuel up the popularity of its screen version too. The movie was produced by TK Pareekutty for his Chandrathara Productions, and was the debut of Ramu Kariat, Adoor Bhasi and S.Konnat – the art director who would later become a staple for all of Udaya’s productions, specially the Vadakkan Pattukal. The main roles of the village rebel Rajan was played by Sathyan ( O Madhavan in the stage version), his lady love Chellamma was Miss Kumari( KPAC Sulocahana in the stage adaptation), and the play had even won the the Kerala Sahitya Academy award for best literary work in the drama category in 1959.  The film adaptation won the President’s Silver medal for best regional film for 1961. You can read an exhaustive review of the film adaptation here, done by B Vijaykumar. I have written in detail about the KPAC Drama songs here. The music for all the songs was by MS Baburaj, for lyrics penned down by P Bhaskaran.

Puthiya Aakasham Puthiya Bhoomi did not really enjoy the popularity of the spectacular success of the play, even with the presence of the A-list actors of the time, Sathyan, Raagini, SP Pillai didn’t do much to help its faring at the box-office.  Riding on the original theme and the impact it had as a play, it helped win the Regional Award for the Best Film in 1962. Here is one of the early works of MB Sreenivasan from Puthiya Aakasham Puthiya Bhoomi. Lyrics by P Bhaskaran. Its a duet by KP Udayabhanu and P Leela. (The song seems to be an early precursor to Sathyan’s picturisation of Periyaarey in Bharya. The similarity is striking).

Everytime I listen to Ennane, Ninnane, I am taken aback at the simple imagery that evokes a flood of memories of Onam’s festivities. The song was picturised on Shanthi and Nellikkodu Bhaskaran, sung by KJ Yesudas, P Leela and chorus as a midnight thiruvathira ensemble that is guaranteed to make smile wistfully.
When P Bhaskaran writes about

I can only fervently hope that atleast the Kodi Mundu survives the onslaught of ‘ our times.’ The Punchavayal is almost a memory now.

KPAC Lalitha ! That’s all that comes to mind with Kaattum Poyi, how young, impish, supremely talented and confident she looked, not to forget her graceful and natural screen presence. KS Sethumadhavan‘s seminal work on “marital infidelity that grows into a mighty oak from  a tiny seed that harbors suspicion”, based on P Ayyaneth‘s work, Sathyan and Sheela excelled themselves in the movie. The track, Kaattum Poyy, Mazhakkaarum poyy is also a metaphor on the daily expected highs and lows of her life, as seen by Gowri ( KPAC Lalitha), the wife of Kuttappan, career alcoholic, electric linesman and loving husband who also takes evil pleasure in pulverising his crockery daily as a domestic activity every evening, as soon as he reaches home.Another Vayalar-Devarajan teamwork, P Madhuri gives it her best as the lilting melody carries you away.

Sreekumaran Thampi‘s dazzling imagery once again comes to the fore with this composition. One aspect that I find very amusing with most of the “Detettive” flicks from Malayalam was the presence of these bunch of amazing compositions, ‘which had no earthly business to be in the film ‘ :).. Poovanipponnum Chingam speaks about the lovestruck male finding the beauty of all the visual delights that Onam represents in his beloved’s countenance. Set to music by Arjunan Master, this is a refreshing take on the usual love song, deftly mixing it with the festivities of Onam. whipping up a magical lyrical treat in the process. KJ Yesudas brings the emotions to life.

It is the Sreekumaran Thampi – Arjunan Master magic once again, in the dulcet and flawless voice of Vani Jairam. As the poet reminisces about

I wonder if the future generations would be able to relate to any of the imagery as time goes by.
Thiruvonappularithan by Vani Jairam

No Onam is complete without the customary rendition of this composition in the popular mainstream media. It has come to represent a staple ingredient of every single “Channel Onam Celebrations”, and not surprisingly, its yet another masterpiece from Sreekumaran Thampi.

Warm wishes of the Season !