This is dedicated to Binu Pappu. 🙂

The camera jump cuts and zooms in on to  a face with blood-shot eyes mostly hidden behind a disobedient ‘Subedar’ moustache, there is absolute silence on the soundtrack for a split second that feels longer, as if the camera is waiting for the seasoned actor, live. In the next moment, the hall explodes in laughter as the  acerbic lashing starts in earnest with ceremonial honors, “Ksheenicho mvaaneeeeeyyy“?

Though he would go on to be instrumental in getting the leading character at the crossroads, Kuthiravattam Pappu didn’t have to featured  in every second scene in Priyadarshan’s Mithunam (1993) to establish his importance in the story. Three scenes were enough. It was more that what he needed to blow you away.  If Priyadarshan is known as the best screwball/goofball comedy director in Malayalam and maybe India, I think, he would have had two brilliant actors to thank for, whose chemistry reaffirmed  that  fact movie after movie – Jagathy Sreekumar and Kuthiravattam Pappu ! With the latter, it was like adding a catalyst into a volatile mix. Explosion was a given.

Priyadarshan’s association with Kuthiravattam Pappu started with his first commercial release, Poochakkoru Mookkuthi in 1984, and it was a warm and winning collaboration that lasted till Chandralekha (1997). With Priyadarshan, Pappu could confidently push his limits in being goofy, or raving mad-cap. revel in buffoonery, and in most cases do a combination of all of these. It is fairly obvious in their early years, but with Vellanakaludey Naadu in 1988, things took a deliciously delightful turn. That, and more as I take you through my favorites in their collaborations in Malayalam cinema. 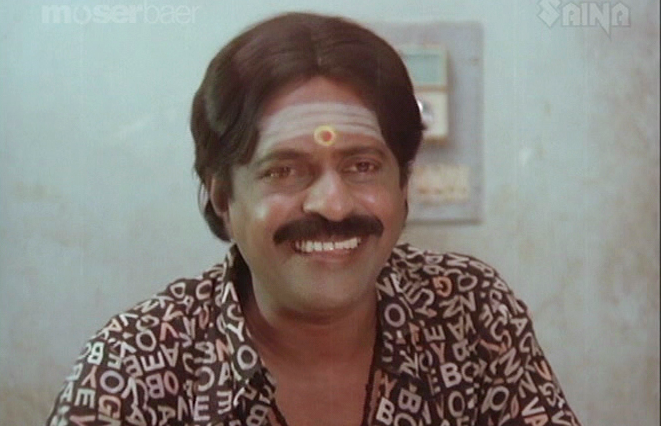 Cherian Nair aka Kuttettan was a new goofball in Malayalam cinema’s comedy domain – here was a character who shifted from bizarreness to slapstick to buffonery without a care and seemed to enjoy doing it whole-heartedly. With Kuthiravattom Pappu onscreen, ‘loud acting’ took on a different meaning altogether. It wasn’t some thing you now detested, rather, he made you actually like it, and before you knew, you really looked forward to Kuthiravattam Pappu‘s characters that usually came on screen resembling those Korean wind up toys hat run on power cells that keep going on and on. The only difference was he could make you enjoy every minute of it, regardless of it being loud.

Cherian Nair raising holy hell as the ‘mental’ fiance’ caught in a mix-up.

Based on a story by Jagadish, scripted by Sreenivasan who also played the arch-nemesis MA Dhavan( !) , this cult, insane comedy caper surely belonged to the two Kurups of the the movie, Sardar Krishna Kurup ( Jagathy Sreekumar) and Koma Kurup ( Kuthiravattam Pappu). If Krishna Kurup was insane, Koma Kurup was insane to the point he was toxic. Never before had two over bearing, pompous, garrulous, senseless middle-agers unleashed so much havoc on the Malayalam screen. Never again, I’m sure. Everything  about the story was eligible for ‘academic psychiatry evaluation’, and THAT was the fun part. Pappu brought a strange vocal quality to his conversational style that made most of his  conversations end up as  questions at the other ! The only time the two enjoyed themselves in a similar environment of insanity would have been  Prassi Malloor‘s Loose, Loose, Arappiri Loose (1988) which was all the more incredulously looney, since there wasn’t any script for the movie from what I could gather. More on that later.

Ex-PWD driver Suleiman, in his allocated 10-odd minutes in a black-comedy with dead-serious undertones, made the entire movie his own personal statement ! A first in world cinema, don’t you agree? Vellanakaludey Naadu does not exist without Thaamarassery Churam. Here is a test. Close your eyes and say “Thaamarassery Churam“. Check the image that pops in your mind. Now say ” Vellanakaludey Naadu“. Note the image in your head. Lastly, say “Road Roller“. I can say with reasonable conviction that never in any of those 3 queries, even for a moment, did any of its lead characters enter your head. Or for that matter, the names from its technical crew. Thereisn’t anything more to explain on what Kuthiravattam Pappu, as an actor, could do to a miniscule role. Vellanakaludey Naadu answers all your apprehensions. If “Ippo Sheriyakkitharam” makes you smile everytime you hear it or mouth it, you need to thank Kuthiravattam Pappu. Thamarassery Churam also had a sequel in another driver, in another movie. The driver was again Kuthiravattam Pappu, but it was a bus service, not a road roller, and you can read about it here.

Suleiman and the Art of Road Roller Maintenance. 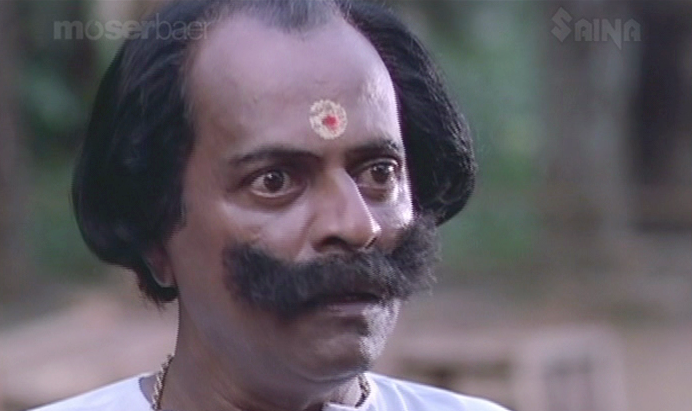 Pithambra Kurup, the money-lender ( commonly referred to as the ‘Blade’) did not even have the same amount of screen time that Kuthiravattam Pappu got for immortalising the Road Roller. He flitted in and out of the movie in three scenes, I guess, but that was two scenes more for the brilliant actor. Scripted by Sreenivasan, brought to life by Pappu, Pithambara Kurup exuded every single quality of  the local money-lender in our neighborhood, and what he lacked in brawn, he managed it with a round-the-clock- muscle hire. There was no doubt about the intentions of the character, he had it out front, “my money above everything else, and make no mistake, I will go to any length to get it back, even at the cost of hammering you to near-death.” Though his demeanor made you chuckle, there was absolutely no doubt in what he was after, in the movie. I think this was one of the rare roles with malfeasance that he brought to life onscreen. I wish he had done more.

Chaakkutty was the uncle you wished you never had. Playing Karthumbi’s ( Shobhana) distant-relative-hence-uncle-nuisance-magnet-cum-bodyguard, he was someone we were familiar with in our hamlet, our immediate family, someone we could identify with. But what raised the characterisation  higher onto the stratosphere, into being a cult favorite was the mannerisms  that he brought to life. Chaakkutty was a bundle of manic, nervous energy looking forward to misdirect it somewhere.

The way he goes in an infinite loop, arching his body, splaying his limbs for effect, screaming “Nee taaaaaski viliyedaaaaaaaaaaaaahhhh” is an instruction one can never forget till Malayalam cinema is around.

Resolving most of the common queries in Logic and Philosophy.

Another of those brief appearances that left its indelible mark. Based on the story by Cheriyan Kalpakavaadi whose origins can be traced to Prem Nazir’s Brahmachari (1972), with the children ‘angle’ from Mary Poppins thrown in, Kuthiravattam Pappu‘s Hitleresque Tutor, who believes in torture and violence as essential tools of disciplining children was a laugh riot. It was loud, yes, but it was something only he could manage to execute with perfection. The Tutor is inevitably forced to flee, screaming his head off, jumping from the top storey, and run for his dear life, but as with every other role that came from Priyadarshan’s outre for Pappu, this stuck to your brain like a cork board-pin.

The Tutor gets a taste of his own medicine.

So, there you have it.

Look forward to your favorite moments from Priyadarshan’s movies with Kuthiravattam Pappu.

Next : Kuthiravattam Pappu and Shaji Kailas