CID Nazir (1971) is arguably the best (smiling here) movie of that genre –  the script was the perfect template, the actors outdid themselves in their parts as ‘secret’ agents, moving around in costumes that were awesomely chucklicious and they  mouthed lines that would send any self-respecting script-writer into self-loathing. But mind you, it was pure fun. As I mentioned earlier, this was Venu’s second attempt at the CID ( The Crime Investigation Department ) genre and he did get it right this time around. Every time I watch this movie, my desire to own a pair of that vintage  Rayban Olympian II shades rides up a notch. Man, what a pair of exotic coolers is that ! CID Nazir (1971) was based on a story by Umadevi (!), dialogues by  PJ Antony,  which was scripted, produced  and directed by Venu. The music was by MK Arjunan, the lyrics for the songs were by Sreekumaran Thampi.The background score was by RK Sekhar and that added to the whole manic experience. It was pure rocknroll 🙂 !

The movie begins with a high-voltage  night-time attack  in a solitary bunglow by a lone masked intruder, and at the receiving end is the lone occupant, CID officer Chandran (Raghavan)  who is murdered.There is a terrified and shocked witness, his domestic help Pappu (Bahadoor), who can only hide and watch as his master gets beaten up and smothered.

With their case officer dead, the  ‘Force’ now turns to their ace-in-the-hole, CID Nazir, who is just back from a  difficult investigation, and is apprised of the situation. He promptly agrees to investigate the murder and taker over the original case the slain officer had been involved in. The CID officer does all this still under the extraordinarily effective disguise of a traditional Punjabi male, and it has to be seen to believed. :). Did I also mention that his code word id is 007? Oh, yes ! 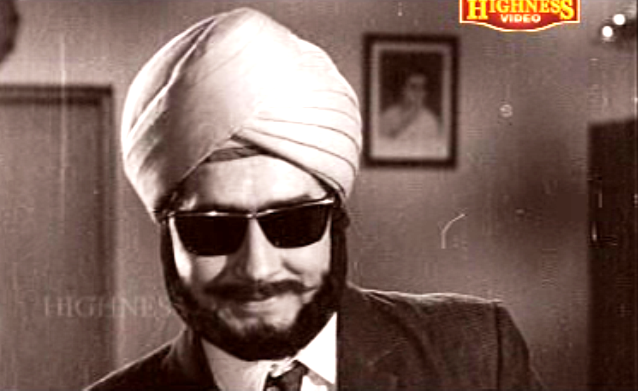 The CID officer is promptly despatched to Kerala but there is danger lurking around the corner. The “Syndicate” seems to have gotten wind of his itinerary and plans to take him out after leaving the airport itself. His chauffeur and car is waylaid and the impersonators receive the

‘unsuspecting’ (!) CID officer. But being the CID Prem Nazir he is,  their hours are numbered.It isn’t long before the sharp pair of eyes behind the Rayban finds another car following them and his own driver acting fishy. What follows is a fight sequence never before seen in Malayalam cinema, that employs some incredulous overpowering techniques about have now posted it here.It is too important to be passed over. The Officer manages to get hold of one of them and drive to the new headquarters but alas, he is discovered dead at the destination. “Paisaaaannn !” the CID officer surmises. Taking it in his stride, he proceeds to his new residence, the very same bunglow occupied by Chandran and does an extensive recce of the place. It isn’t soon that the ‘House owner'(TS Muthaiah as Shankarapanicker) and his pretty daughter  ( Jaya Bharathy as Shanthi) pays their new tenant a visit. CID Prem Nazir is taken aback for a moment . “Isn’t he one of them in my set of Suspects’ Photographs?” He smiles to himself. Danger is everywhere ! 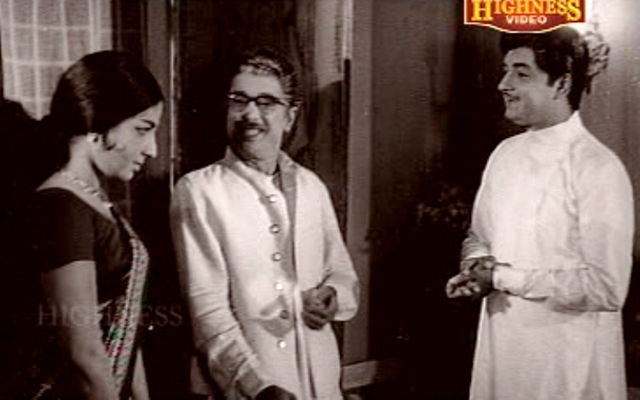 Meanwhile at our desi “SPECTRE‘ headquarters, the “Baass” ( Boss for newbies)  is livid, struggling with a controlled nuclear explosion of emotions in his head. The team’s mission has been a failure and that is unacceptable. The team leader is promptly despatched with a shot, and the rest left off with a stern warning to get CID Prem Nazir at all costs. We are also introduced to the ravishing, buxom Ms Lovvelly[ Sadhana] (Lovely for newbies) who is entrusted with seducing the officer and taking him out. 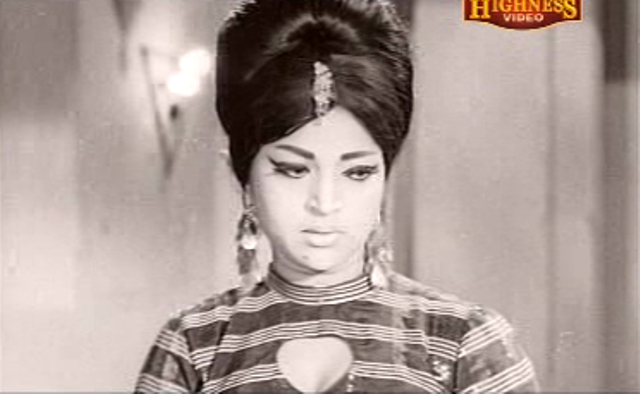 CID Officer Prem Nazir soon falls in love with the beauty of his new location (the house owner’s daughter included) and also finds time to sing out as an when the mood overpowers him. In a visit to his house owner’s place, Shankarapanicker lets him in on his life’s tragedies. His elder brother Sivaram (now smiling from the living room wall) seems to have been murdered by his nephew who is now on the run, and whom, he strongly feels maybe in charge of all the mischief and mayhem around. It isn’t long before Adoor Bhasi arrives, ‘reports’ to his senior officer, and disguised as an elderly out-of-job waiter finds a job at King’s Hotel, the suspected hub of the ‘Syndicate’s’ nefarious activities. Officer Bhasi also

finds time to woo his pretty neighbor (Sreelatha as Sreelatha). PN 007 pays a visit to the hotel and s delivered a cryptic note by Bhasi, the restaurant waiter.

It says,”Meet me at the Swimming Pool.” The dashing officer  meets Luvvelly here in cosmic, surreal circumstances. Possible queries like “How does he know it was her who sent the note?” and “How does he know who in Lord’s name is Luvvelly ?” are all irrelevant . All you doubting Thomases, remember, he is CID Nazir!

The flirting has to be heard to be believed.

At this juncture of the movie where raging hormones, polyester, conspiracy and sassiness collide, one is at a loss in deciding whether Ms Luvvelly is a  a double-agent or an assassin. She could be either, or both. CID Prem Nazir is now playing with fire, with added cellulite. 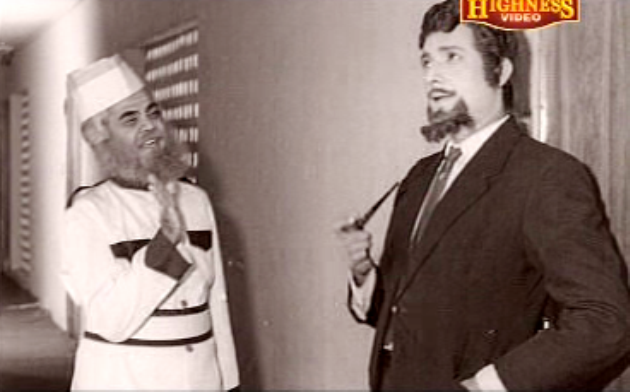 Into this ‘difficult circumstances’ enter Sivaram ( Jose Prakash, who else ?) from Sinkapoor, who is a regular occupant of Room no 42. And who else to chaperone him, but our friendly-neighborhood steward Bhasi. The CID officer, neck deep in investigations at this point gets proposed to by Shanthi, becoming visibly flustered and embarrassed as he sits through that, and on top of that, gets attacked by an unknown assailant as he gets back home. The assailant, this time has managed to disappear right under his nose ! Its a frustrating day for our CID Prem Nazir. But that is just about to change. Ms

Luvvelly pays her new loverboy’s place a visit the next day. The suave CID is at his flirtatious best while his hands are busy rummaging through her purse and snucking away documents from it. Aha ! A card with the address of one MA Raju scribbled on it suddenly seems very important amongst the contents.  The CID officer decides to pay him a visit, as Hussain Sait, an NRI merchant from Sinkapoor (again!), willing to invest a huge, fat load of cash in Raju’s ( Nellikkodu Bhaskaran, dashing and handsome) businesses. 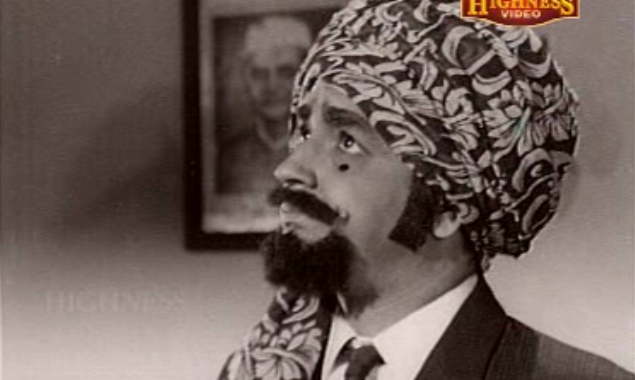 Do rich Muslim traders from Sinkapoor dress like that? Damned if I knew, but it looks awfully cute :). In another part of the city, Officer Bhasi gets waylaid enroute to his evening shift at work at the King’s Hotel and he does employ some innovative methods to shake off his attackers. The Syndicate is getting desperate. The Baass asks Luvvelly to get him CID Nazir to the hotel. They order coffee but there is a secret signal in the crockery that denotes danger! The CID is quick to cut short the meeting and leave abruptly.(The movie gets chopped here – my VCD that is, and the next scene finds both the officers in bandages, who have obviously survived from yet another attempt on their lives.) Worse is yet to come. He narrowly escapes being electrocute in the bathroom from the bath tub fixtures, but in the process stumbles upon a secret exit. On a hunch he follows through the jungle in the general direction in the wild and meets a figure fleeing in haste. It is Shanthi ! This is getting complicated. 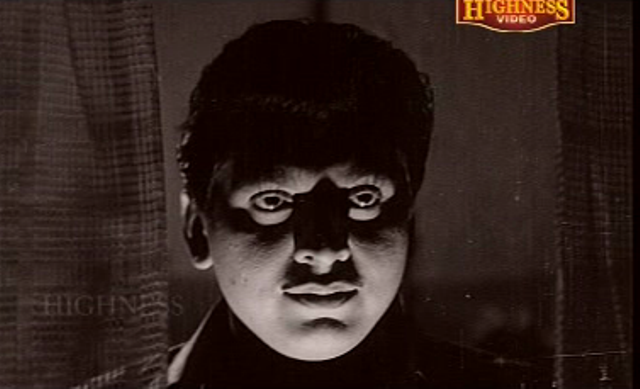 Soon, CID Nazir is woken up in the midnight by a jobseeker who ” knows how to type and badly needs a job !” Whoa, at the midnight hour. It is Das ( KP Ummer) and comes heavily recommended by Shankarapanicker. He is promptly appointed too, as his secretary. Who doesn’t know about  the paperwork that sometimes almost threaten to deluge CID investigation work ? Now, Prem Nazir can fully concentrate on his investigations. But wait, there is another motive too. He is recommended by one from their Blacklist, and even Das too figures in it. Get the idea ?

Actor Jayaram recalls his one of his favorite moments from CID films.

The CID escapes another attempt on his life at the King’s Hotel where Bhasi arrives in time to save him. The Syndicate isn’t about to give up. Luvvelly meets him soon after in an evening rendezvous, gets him drunk till he passes out in the room and leaves.The assassin who follows into the room post her departure is met by the officer, ready for him. He isn’t drunk ! But as he is overpowered, he escapes ! Meanwhile, Das comes across his employer’s muse and stops dead in his tracks. She is none other than his long-lost love but she went by another name then. She looks right through him. Surely there must be a mistake? Or does she harbor bigger secrets inside ? The symapthetic employer with a heart of gold, picks on the signals of distress and plugs in this aspect into the already explosive-ridden case schedule. He manages to unite them with some good, old-fashioned past-regression techniques ( an old song they used to sing as lovers, capiche?) and also finds time to pay our MA Raju another visit, this time with a solid investment assurance. 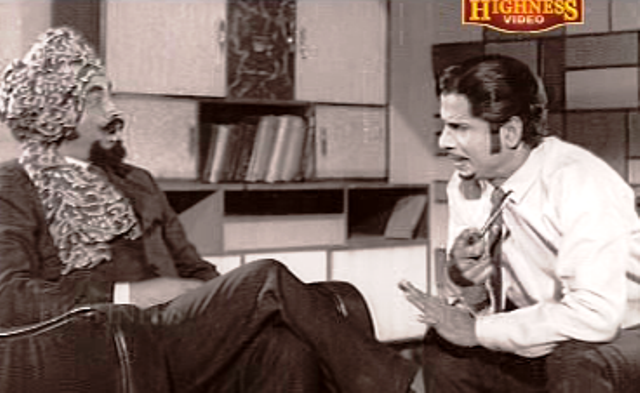 The brazen Raju, puts across a counter-offer – “What if we substitute 80pc of your currency with counterfeit in trading the goods?” The generous laundry man even hands over a lakh in fake notes to this rich Sinkapoor trader as goodwill. Tada ! The CID just got his evidence hand-delivered. The big moment to gatecrash into the the villian’s lair comes soon. The CID HQ gets wind of the bosom pal of the Baas, arriving from Sinkapoor with his wife, preumably to meet him in India. ( Questions such as “If they knew him, surely they would know the identity of the Baass too ?“, and “Why not manipulate him to get the Baass out of the Lair?” are all irrelevant – remember, he is CID Nazir. Strange are the ways of the CID Officers.) CID Prem Nazir intercepts the couple at the airport, and along with Bhasi takes their place as they are driven to the Lair. Remember, CID Officer Prem Nazir is a master of disguises. But plans go awry at the Lair as Bhasi is discovered and all hell breaks loose. Louvvlley springs a surprise as she takes sides with the CID. She is after all one of them !  Aha !

The Baaass escapes but is chased up a drainage pipe, across a creek and into the house of Shankarapanicker where he is shot dead by he officer. He was after all, his presumed dead brother ! The explanations that follow on the conduct of various characters are enough to give you a splitting headache so I would rather stay away from it. All it matters is to lie back and enjoy the manic ride.

Is there a VCD /DVD available in the market?

Sure, there is. You can buy it online here.

Next : The Gadgets, Gizmos and Techniques of the CID Officers.