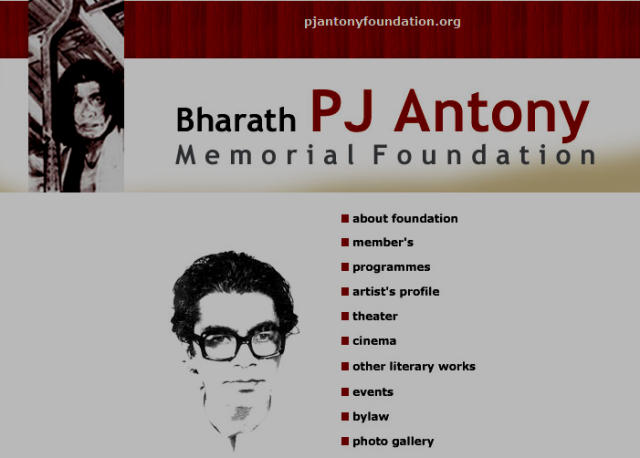 An online tribute to one of the finest theater and film actors in Malayalam Cinema by the members of the Foundation, the place seems to have been left unattended post its inauguration. The last update seems to be in 2008. For a stalwart who strode the mediums of theater and films with equal ease and a body of work that includes Malayalam Cinema’s First Bharath Award, the website leaves you saddened. Not one write-up about his role in Nirmalayam, a possible interview with MT who created the character in the first place, or for that matter excerpts from atleast the adaptation of his novel, Oru Gramathinte Aatmaavu ( A Village’s Soul) – the wish list goes on. Truly, the legend deserves more care and respect – at least we owe that much to the legend and for the coming generations who will naturally look up to the Web as their fount of knowledge.

One of the pioneers of the Malayalam film industry, the ‘half’ of the ‘Velukkutty-Bhagavathar‘ duo, one of the first one to put out an LP in Malayalam through HMV (the fact of him being a pioneer in this is still disputed), the actor who sang his songs for playback too, the theater exponent who pulled out Malayalam Theater from the torpid gulag of ‘Mythology’ into world classics, singer par excellence – Sebastian Kunjukunju Bhagavathar’s epithets flow like his confident, robust vocals. The website is available both in English and Malayalam versions (I was pleasantly surprised ) and offers the vocal tracks from the RPM of Jeevitha Nouka ( 1940) and Jnanaambika (1952). There are a collection of some invaluable photographs from the era and the content itself is worthy enough for an evening well-spent. Highly commendable effort in keeping the legacy alive.

Vijayalakshmi nee Maadhavi S is very much our own too, just as she is for Tamil, Kannada, Telugu and Hindi movies. One of the few actresses who have got their own web presence, her online habitat is more or less a representation of her enigmatic persona she had cultivated in her active years in cinema – just so much and nothing more. The Gallery has a delightful collection of her childhood years -even one with Jayalalitha, and there is no dispute to which holds pride of place in her collection – Unniyaracha from Oru Vadakkan Veeragatha is right there on her homepage 🙂 Though she has left a channel open to contact her ( and I have written to her, reply awaited), I wish there was much more in terms of the movie details, her perspectives on her characters…its the same story.

Clearly, the better among the lot and my favorite along with another one. An effort backed by a group of editors along with Rahman himself, the activity levels are exceptionally high with their regular updation of 1. his current releases and its allied activities 2. His notes on his movies past and the ones who influenced him as an actor ( something that’s highly commendable) – which also makes it the best in terms of ‘providing’ for a ‘hungry’ movie fanatic. From what I could gather, the team puts up the updates and the Malayalam reminisces part of it, while Rahman puts in his brief updates in English. With a content team like this in place, working reasonably well, I hope they atleast do away with the clunky, archaic Blogger template and sit down and design a great one from scratch, with a fantastic content management system like WordPress to power it.