The first in the series of the KPAC plays to be adapted on to the silver screen, the popularity of KPAC’s play which debuted in 1957 helped in its own way fuel up the popularity of its screen version too. The movie was produced by TK Pareekutty for his Chandrathara Productions, and was the debut of Ramu Kariat, Adoor Bhasi and S.Konnat – the art director who would later become a staple for all of Udaya’s productions, specially the Vadakkan Pattukal. The main roles of the village rebel Rajan was played by Sathyan ( O Madhavan in the stage version), his lady love Chellamma was Miss Kumari( KPAC Sulocahana in the stage adaptation), and the play had even won the the Kerala Sahitya Academy award for best literary work in the drama category in 1959. The film adaptation won the President’s Silver medal for best regional film for 1961. You can read an exhaustive review of the film adaptation here, done by B Vijaykumar. I have written in detail about the KPAC Drama songs here. 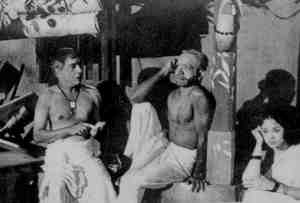 Puthiya Aakasham Puthiya Bhoomi did not really enjoy the popularity of the spectacular success of the play, even with the presence of the A-list actors of the time, Sathyan, Raagini, SP Pillai didn’t do much to help its faring at the box-office.  Riding on the original theme and the impact it had as a play, it helped win the Regional Award for the Best Film in 1962, and as usual TE Vasudevan, the legendary producer gave the Award ceremony a wide berth. He would repeat that for every single of the 5 films of his that won the National Awards. This was also the third film of MB Sreenivasan, who was just warming up, I would say, learning the nuances and the fine sensibilities of a language that was alien to him, but the musical sensibility wasn’t. In five years, after a stint with the Tamil Film industry, he would return to give us the songs that we use to define the 70’s and 80’s now.
Here is one of the early works of MB Sreenivasan from Puthiya Aakasham Puthiya Bhoomi. Lyrics by P Bhaskaran. Its a duet by KP Udayabhanu and P Leela. (The song seems to be an early precursor to Sathyan’s picturisation of Periyaarey in Bharya. The similarity is striking)

Ashwamedham  was another path-breaking creation from Thoppil Bhasi, and this time he dipped his pen in acid to lash out against the scourge of the times – Leprosy. It was the classic tale about  a love-struck couple, the groom who leaves the bride at the altar when he comes to know she has Leprosy, shunned by her own family and her friends, takes refuge in the Leprosy Sanatorium( a commune), and comes under the protection of the Doctor, a scientist who vows to cure her as it is curable. The scenes were shot at the Nooranad Leprosy Sanatorium, the biggest in Asia, and yes, it is still very much there. Directed by A Vincent, there was a new set of songs written for the film adaptation, as keeping with the practice, and were very popular. I have written about the songs from the KPAC Drama version of Ashwamedham here.

The deeply philosophical Oridathu Jananam Oridathu Maranam from the movie.

Thulabharam is a watershed in Malayalam Cinema. This was the first time in Indian Cinema, a popular play in a regional language was adapted on screen and was a box-office success, and continued to repeat its success after being remade in Hindi, Tamil and Telugu!  I am not aware of the Kannada version, and hence would appreciate any input on that. The story of two best friends, told against the backdrop of trade-unionism and political principles, it was as chilling and real it could get on screen from the stage-version. The film version was directed by A Vincent, the story and screenplay was again by Thoppil Bhasi, with suitable tweakings for the film adaptation. Thulabharam is one of those movies, that refuse to go away once you have watched it.

Mooladhanam, as a play was a huge success, so huge that it even had to do three venues at times on the same day! The Play also marked the debut of one of the most talented and popular actor of Malayalam cinema, Kaviyoor Ponnamma, who was all of 14 years old at her debut! The film version was directed by P Bhaskaran, the screenplay was by Thoppil Bhasi , who had by now become a master in the art of adapting his hugely popular plays to the cinema medium. It was set in the 1944-46 era, where the simmering discontent and anger against the proxy-rule by the Diwan of Travancore raged into a full blown rebellion, as a part of the Indian Freedom Struggle. Interestingly, the character played by Prem Nazeer, one of the leaders of the struggle, was named Mammootty 🙂