Four out of five friends stared blankly when I asked for the actor who played the title role in Bharathan‘s eponymous Vaishali (1988), which is also a telling tale on a starburst which was “ooed and aahed”, and then, got neatly packed away in our cinema’s dusty, moldy archives. MT described the film as one of his “good films, though he felt, Bharathan had over-decorated it a bit, maybe because he was a painter“. Other epithets for Vaishali, the film, includes  the “prettiest film” ever made in  Malayalam and Bharathan’s painting in Celluloid, but, one has to acknowldege, there has never been a film, visually dense, exquisitely textured and sensually glowing as Vaishali (1988).

And all those pithy epithets lead back to the actress who portrayed the role, Suparana Anand, who was like this proverbial ‘ flash in the pan, bright but short-lived’. Suparna played the exceptionally beautiful daughter of the royal mistress ( illegitimately sired by the King) who is entrusted by the king to seduce the teenage son of sage Vibhandaka, from the deep forest, to take part in a yajna that would bring rain to his drought-ravaged kingdom. The reward is recognition of her royal blood  as a royal testimony in front of his loyal subjects, but the story takes a tragic turn, in another brilliant perspective on mythology from MT.

Suparana Anand portrayed this composite balance of sensuality, voluptuousness and an innate innocence to the character, and maaaann, was she beautiful! Though she felt a little wet-around-the edges when it came to emoting on screen ( the Malayalis, as a community are unforgiving in that respect), under the able direction of Bharathan, she came out brilliantly as the young Vaishali.

Here is the beautiful Indraneelimayolum from Vaishali. Each frame is like a painting, if you haven’t noticed by now.

Utharam, directed by VK Pavithran, was scripted by MT, based on Daphne Du Maurier‘s short story No Motive, maybe amongst the only two creations he rewrote according to our sensibilities. It was an unusual thriller, which had parallel narratives and timelines that went back and forth, a remarkable and commendable effort from the entire team. Suparna played Celina Joseph, a poet with a deep, dark secret, inextricably tied with her childhood and her best friend Shyamala Menon ( Parvathi). A shattered Balu (Mammootty) is on a journey to find answers to Celina’s suicide (she is also his best friend’s wife and is very fond of her, as a sister) and slowly unravels the frightening strands of secrecy that binds her past. She had come to he own by this time, and displayed a restrained, yet powerful portrayal of the tormented poet on screen.

A clipping from the movie Utharam (1989)

I still haven’t got the faintest idea how she ended up in this one. Maybe Vijy Thampy was riding on the goodwill and ‘marketability’ of her star value in this bizarre, crazy, mediocre drama about mixed identities, an insanely rich and naive heir to a local squire who runs away to the city with a bundle of money, a professional assassin, another bunch of assassins, the hero in the city – it was a crazy trip.
Suparna played Asha, the local business magnate MRC’s son, who has his own agenda in the kidnapping of his own ‘daughter’. Curiously, this average grosser was the film that got back Suresh Gopi back into the attention span of the average Malayalam cinema goer, from a film career that was on a tailspin.

An excerpt from the film.

Suparna was very, very lucky and fortunate to have been a part of Padmarajan‘s Njaan Gandharvan {I, Celestial Lover- can it get anymore poetical for a movie title}, as Bhama, the bubbly, vivacious, intensely naive and romantic college-going teenager, who falls in love with this traveller from the Heavens. Only Padmarajan, in his infinite fount of unique creativity, would have been able to come up with a story, and effectively transfer it on to the screen with a screenplay that can only be admired from a respectable distance. It also helped that the Ganharvan was played by Nitish Bharadwaj, who surprisingly took to the role like a fish out of water ( the long stint in the Mahabharatha franchise had worked its charm). The characterisation called for this beautiful, radiant naivety that binds like gossamer around the celestial lover, and Suparna had it down pat, this was familiar territory to her. I might go on and say it that, no other combination would have worked as beautifully as this unusual pairing of Nitish and Suparna, which also came to be Nitish’s first and last film in Malayalam.

Here is Palappoove from Njan Gandharvan which won K.S. Chitra the State Award in 1990 for Best Female Playback Singer. 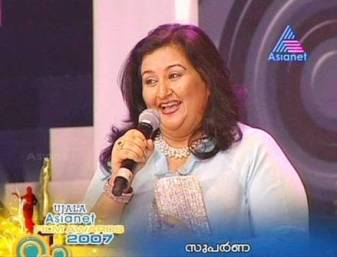 As an actress, Suparna Anand’s best works lie in Malayalam, though the rest of the country knows her as Jyoti Deshmukh from Tezaab (1988). The rest of the Hindi movies that came her way were cheap B-grade productions that are best worth not mentioning about.

She was last seen in Aastha (1997), which was borderline soft-porn, a film that was cringe worthy at best, even for an actress like Rekha.

Came across this picture on the Web in one of the Malayali Forums. Time seems to have taken its natural course on the actress, but may that be, she will always be remembered as Bharathan’s Vaishali in Malayalam Cinema.

27 thoughts on “Starbursts on the Malayalam Screen | Suparna ‘Vaishali’ Anand”