From being the cinematic ‘experience’ of the movement, captured from real life ( with a reasonable amount of commercial ingredients added), I guess the genre got itself a kick in the face (literally) when Adoor Gopalkrishnan‘s Mukhamukhom (Face to Face) released in 1984. Adoor, just pulled apart the rotting guts of the ‘movement’, and then laid it bare on the silver screen. Broadly, I feel, from this point on, the focus was more on the effect of the ideology on the individualities/personalities, rather that glorifying the ‘revolution’. The past 2 decades haven’t budged from this perspective – it was more about the “I, than the Ideology ” . I guess the ones that come to mind, across these 25-odd years, reasonably explains well, the enduring perspective of the dilemma of the human being who gets caught between the ideology, consumed by it, and is gradually disillusioned by it.

The film was in two phases,  the first part in the prime of the revolution, just as the movement is reaching critical mass and is about to sweep the electorate. The main protagonist, the local firebrand communist and union leader of the tile factory, Sreedharan (P.Ganga), goes underground following the unnatural death of the owner of the factory. He fails to turn up even as his ideology wins the mandate in the State, and is presumed dead, and naturally, a martyr, high up in the party’s ‘inspiration’ totem pole.

Into this glorious environs, returns our Sreedharan, by now disillusioned, disinterested and devastated. He offers no explanations for his absence, nor does he display any interest in the ideology which has now elevated him to high priest status. He spends his time sleeping and drinking, much to the chagrin and seething anger of the party workers, and the film ends with Sreedharan murdered and reclaiming his ‘martyr’ status. I remember the self-righteous venom and hate spewed by the Party, viciously criticizing the movie at the time of  its release. You can read more about the director’s version here and here.

It is heartening to listen to Adoor sticking to his guns, two decades later, re-emphasizing the fact that the film could be about any ideological movement, and it was more person-centric than ideology. 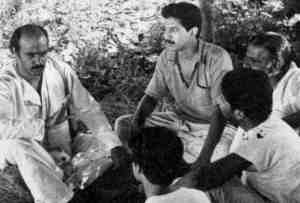 Close on the heels of Mukahmukham came Lenin Rajendran’s Meenamaasathiley Sooryan ( The Midsummer Sun). A staunch supporter of the ideology,his story was about  the feudal-uprising at Kayyoor, against the “powers-that-be”  (read the colonial British), but based on Socialist principles. The film revolved around the Master ( the local teacher-cum-political idealogue for the cause, brilliantly played by Bharath Gopi, and four young and firebrand local youths with incendiary hearts and ideals, played by Vijay Menon, Murali, Nizhalgal Ravi and Venu Nagavally, who are sentenced to death by the local British court for sedition

Keeping true to Lenin Rajendran‘s style of film making, it faithfully stuck to the central theme of the grim realities of the have-nots against the Empire, setting it in the harsh and ‘hot’ palette of the Summer of Northern Kerala. The movie also leaned more towards the personal conflicts of the protagonists, trying to keep their allegiance to their ideals, the cause and worried about their relationships, all in the same breath. The uprising of Kayyur, along with Punnappra-Vayalar remain two major controversial topics of discontent and raging debate amongst Historians and the Party loyalists even today. The former lays it down with indisputable proof that they had to do more with the simmering discontent than ideology, the party faithful think otherwise. Here is a clipping from the film, where the Warden comes to check with the “Condemned” for any last requests, and they reply they want to see the Red Flag instead of the Union Jack on the flag pole ! You could also watch a Short on the history of  the Kayyur struggle here, as telecast on Kairali TV. They have even started off on a re-telling of the struggle now, by another mainstream Director in Malayalam, of which the details are here.

Lal Salaam ( The Red Salute), directed by Venu Nagavally {who himself was a part of the cast of Meenamasathiley Sooryan (1985)}, narrated an era of friendship of two dear friends and comrades-in-arms (literally), DK  ( Murali) and Nettooran ( Mohanlal), told against the backdrop of the rising Communist movement in Kerala. It traced the inevitable curve of their friendship as the former rises to power, the latter rejects it, and between these, lie intertwined the aftermath of an illicit relationship, a marriage founded on political beliefs, and the inevitable slide into  questioning of values and morals blinded by power.  In short,  it was a little bit of everything to make it a sure fire commercial blockbuster at the box-office, yet stay rooted in the tale of the loss of the socialist dream. The script was by Cherian Kalpakavadi, son of Varghese Vaidyan, a well-known Communist activist from Central Kerala. The two protagonists were composites of the  well-known leaders of the cause in Kerala, whose similarities just stopped short of actually naming them.  It also had the deft, ‘popular’ signature touch of Venu Nagavally, who had by then made his mark as a Director who narrated bitter-sweet stories on celluloid. The cast would again come together for a more historic project called Raksthasaakshikal Zindabad ( Long Live the Martyrs), in 1998 .

Watch a poignant excerpt  from the movie here.

Related : The Revolution on Film – 1