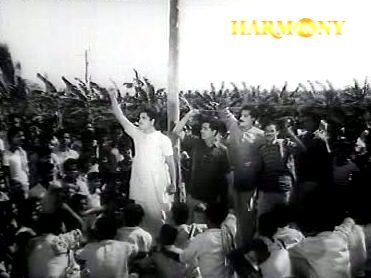 When KPAC went ahead and transferred the ‘socialist revolution’ on to the commercial framework of Malayalam Cinema, they were also cleverly marketing the principle onto those parts of the community that had not yet heard or known about the ‘movement.’ That was one aspect. It also gave us some great compositions through them movies that still manage to capture our attention, and sing along with it, amazed at the way some can turn on the goosebumps routine. But, whether they are equally as inspiring as they once were, hmmmmm..that would be something really worth thinking about, when the idea itself is gradually sliding down the planet’s  history dustbin. No, personally, I still believe the idea will have universal relevance. It was the ‘execution’ part that did it in. Here are the ones that still manages to get my eyes misty and the heart reasonably wistful.

Thulabharam won director A.Vincent the National Award for the Second Best Film, I remember. He was on a roll, in the 60’s, with Bhargavinilayam (1964), and the success of Thulabharam followed by the classic Nadi (1969), all garnering top National Honors. This was also remade into Hindi as Samaj Ko Badal Dalo (1970), directed by V.Madhusushan Rao. The song started off with the socialist refrain “Workers of the World, we have nothing to lose but our chains..”, and took it from there.

This must have been the first movie that adapted an event connected with the Communist Movement in Kerala onto a successful movie. Though the arguments and debates still rage on the classification of the uprising – some call it a class struggle, others call it misguided rebellion, it sure helped in rake in the moolah at the box office. “Comrades, Onward!” went the lyrics, something the masses could relate to, easily.

The film title, borrowed from Marx’s seminal work, itself resonated with what the entire narrative was all about. P Bhaskaran chose to start with ” From every drop of blood shed for the cause, will arise a thousand comrades more!”, enough to rouse anyone with a general sense of equality and common sense running through their blood.

The patriarch of KPAC this time oversaw his popular play being adapted to screen. Devarajan Master who was instrumental in churning out the classics in the theater production, went ahead and gave a completely new set of timeless classics for its onscreen version too. Now, that is divine talent.

It is time they made an insightful documentary that celebrates the contributions of KS Sethumadhavan to Malayalam Cinema. In a career that spanned 3 decades of active cinema production, there are very few that can hold a candle to the innovations and the daring technical wizardry he brought to the industry.Vayalar chose to borrow the verses from the Socialist cause, “Workers of the world, Unite!”

Of the handful of films, the legendary actor Madhu directed, and more or less produced, this must be the only one with a incendiary theme that bordered on the cause. Vayalar/ONV team were together on this one, andthe lyrics that came out were defiant and rousing,” We refuse to die, we refuse to be cowed down, and don’t you dare think you can make us go on bended knees to kiss the capitalist behind!“

Surprising!  A Malayalam film with songs set to music by Shankar-Ganesh.I guess this was also the movie that set Mammootty on his path to “megastardom” on the Malayalam Screen.ONV just repeated what Vayalar said in  1971, but with a more rousing set of lyrics, the idea still said the same thing ” Workers of the world, Unite! You have nothing to lose but your chains!”

Related : The Revolution on Film – 2