Intricate and innocent – hardly the pair of words you would associate with the quintessential species called the ‘house-owner’ seen in Malayalam movies through the years. In my college years, I spent a great deal of time living in rented houses and had my share of interaction with this species. None of it was heavenly and, if at all I did gain a perspective about them, it wasn’t the least laudatory.

They would fight with you for the rent (inevitably late!), spy on you lest your female friends made it a habit to visit you for socially questionable reasons, and face a barrage of questions every time your mates descended for a raucous party which would shake the neighbourhood and leave everyone’s eardrums in tatters. Life as a tenant was essentially about time spent in pursuit of clandestine arts – how to hoodwink and how to deal with a pest called the ‘house-owner’.

Malayalam movies have had their share of such ‘house-owner’ movies over the years and, comic or otherwise, they have only served to further the notoriety associated with the clan of house-owners.

So when my friend termed Sanmanasullavarkku Samadhanam (1986)as a classic, way apart from the established genre, and used ‘intricate’ and ‘innocent’ to describe the social milieu portrayed, I was interested. Having seen the movie a few times over the years, thanks to cable, I could not help agreeing with such a take on the genre. And every time I see it, it gently sinks in as a feel good factor primarily for its middle-class innocence and effective interpretation of the under-the-hood social currents of the 80’s.

The rank Naxalism of the 70’s chose the wonderful 80’s to merge into the practical 90’s and the movies made during the 80’s amply bear testimony to such a daft definition of the changing times.

Sathyan Anthikkad’s Sanmanasullavarkku Samadhanam walks across with a quiet demeanour, taking a slant at the comical sometimes, not out of script compulsions, but more so taking the role of a clown in a circus-tent, pandering to the tumultuous applause amidst a life lived in concealed penury. Mohanlal, as the lead, plays a subdued house-owner forced to take a stance of evicting his tenants – Karthika and her family – to sell the house and settle the debt compulsions inherited from his deceased father. 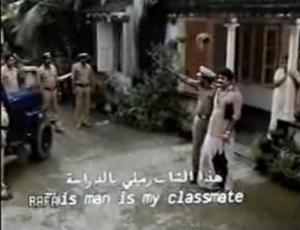 Even though Mohanlal would deliver pure, unsurpassed comical successes like Kilukkam in the following years, Sanmanasullavarkku Samadhanam definitely ranks high for it so significantly depicted the pathos of the confused but good-hearted middle-class – seeking a path in a society reeling under years of prevalent ineptitude – donning the generally accepted garb of a comedy film.

The only instance in the movie, where subtlety takes a backstage is when Mohanlal’s mother, played by Sukumari, begs him tearfully to take her away to that ideal place which is devoid of any disturbance of moneylenders, as the court authorities go about seizing their village home in the background. Sukumari’s lament is representative of the common man, decidedly decent partly out of ignorance and partly conventional propriety, letting know a desperate plea to get out from a basement of pent-up frustration into the sunshine of successful survival.

For its innocent humour, it is characteristically Wodehousian though it is not difficult to believe that Sathyan Anthikad(direction) and Sreenivasan(original screenplay) team had more than a film in mind when they set forth creating an 80’s masterpiece.

The characters represent a cross-section of the society – people whom we meet in our everyday lives – and the identification with them is so effortless which is also why the movie is so endearing. The last scene, between the lead characters, both victims to irreparable loss, is at once tender and evocative with a promise of good things to come, confirming the credence that when everything is lost in a small man’s world, it all works out in the end, even though subject to the funny circumstances that can throw a spanner in life’s works. After all, you learn to fight when your back is against the wall.

By the way, I changed houses 5 times in three years of college life. You know why. 😀

Watch the classic “Reunion and Intimidation”.

5 thoughts on “The Most Memorable House Owner in Malayalam Cinema. Ever.”