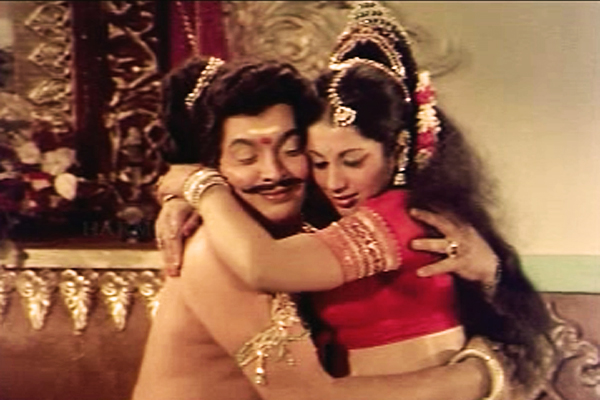 Though the Northern Ballads and its variations had been adapted to local folk theater, I think the reigning God of Malayalam film production Sri. Kunchacko who owned the biggest studio  of those times, Udaya saw the mother lode of a possibility by translating them on screen. Sri.Kunchacko, I think, was the Yash Chopra of the Malayalam film industry.He started off the filmi ballads with Unniarcha, a B& W production, in 1961.

Sri.Kunchacko added variations, brought in new characters, spun off sub-stories, all of them wrapped up in the same gaudy, kitschy costume trains and ornaments borrowed straight from the local theater. I always thought there was a divine connection between the bright and flaring silk embellishments to its ‘original’ counterparts across the sea, the Samurais of Japan! 🙂

While they wore sombre black, pledged their allegiance to the local squire or the Emperor and killed on their behalf, far away in a lush tropical paradise called Kerala, their soul brothers were doing it on screen,decked up in all the colors Eastman Color could comprehend on film !

Udaya Studios produced in about 9 movies based on the Northern Ballads in their golden run, ending with Kannappanunni, which was Udaya’s 100th movie,which also became Sri.Kunchacko’s swansong – he passed away without being able to see the completed version.

It was later completed by his brother, Sri.Appachen, who set up the Navodaya Studios after his brother’s demise. And Sri.Appachan was someone who was a true “vision”ary, as his productions from Navodaya  starting rolling out would prove to the world.

This is the list I have of the Vadakkan Pattukal based films from Udaya Studios. Please, please let me know if I have missed out any.

And, I can’t wait to share my perspectives on each one of them 🙂

One thought on “The Kerala Samurais in Technicolor”